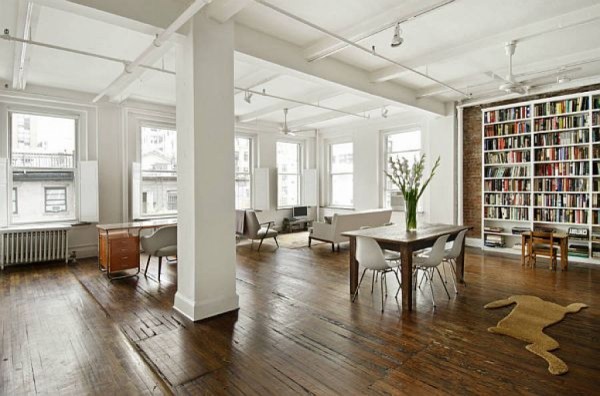 We’ve all seen movies set in New York that go through the boy meets girl, they fall in love, they get a place together thing.

Which just happens to be a cavernous loft apartment with a view of all the City’s famous landmarks from its huge, pristine windows.  Wooden floors, exposed beams, all open plan with an en-suite bedroom as well as somewhere she can study for her law exams whilst he works out in his mini-gym up in a corner somewhere.

They’re young and broke. She’s a law intern, he’s a jobbing actor doing a spot of work as a waiter ‘inbetween jobs’.

And one of the endearing clichés of the movie business.

It was films like Ghost and Single White Female which started and perpetuated the myth that all the beautiful young people in New York hang out in such places. And there was, at least back in the early 1970’s, some truth in the story for that was the time that run down and occasionally undesirable neighbourhoods like Soho, Tribeca and Bushwick were briefly occupied, in all their squalid glory by struggling artists, writers and musicians.

Open, cold, damp spaces with no power or water supply with holes in the walls and roof as well as hot and cold running vermin.

That was, and remains, the reality of New York loft apartment living for the vast majority. Not these contemporary palaces, lavishly furnished to a tee with enough floor space in them to store an airbus.

One of whoms occupants just happens to be, as portrayed in the aforementioned Ghost by Molly, a “struggling potter.”

Obviously a wealthy “struggling potter” as, even back in the early 1990’s, the rent on the enormous apartment she continued to live in after Sam’s untimely murder would have been several thousand dollars a month. The apartment in that movie was based on an existing 3,600 square feet space that took up the entire top floor of a former 19th century button factory in New York’s fashionable Soho area.

Wholly plausible then. Not. Indeed, about as believable as another great movie cliché, the one that says wherever you are staying in Paris, there will always be a view of the Eiffel Tower from one of the windows.

Now there’s nothing to stop you moving to the Big Apple and renting a loft apartment of your  own. Nothing at all.

The City has legions of realtors dealing in such properties with the typical two bedroom apartment costing a little under $9,000 a month in rent. That’s, at the time of writing, around £6,000.

So, clearly, not for everybody. Infact, not for anybody at all really apart from the exceedingly wealthy.

So much for the beautiful young things who flip burgers at night and write songs by day in their $9,000 a month loft apartment.

But then I guess Ghost wouldn’t have been so good if Sam and Molly lived in a basement squat under a pizza parlour in downtown Midtown?