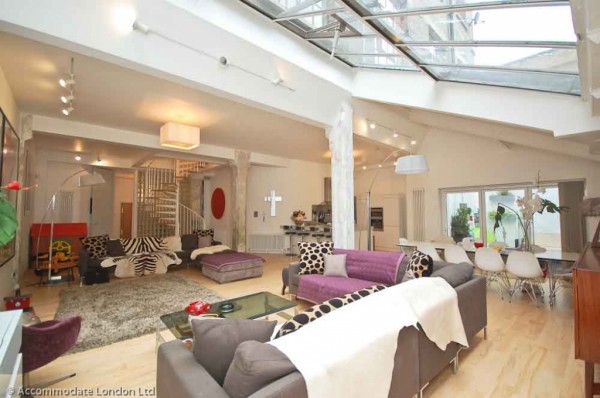 Whenever most people think of a loft apartment, it's invariably the Big Apple that comes to mind.

Bright and spacious high in the sky living for the high flying. To rent or buy. Just don’t go thinking they’re the sort of places struggling artists or wannabee actors hang out because you’ll need pockets as deep as the foundations that go with some of these in demand warehouses.

Because they don’t come cheap. How, for example, does $4,200,000 for a ‘spectacular full-floor duplex loft in the heart of Chelsea with outdoor space’ sound?

‘Outdoor space’ in one of the world’s most expensive areas of real estate? That’s going to bump up the price considerably. But these City realtors are nothing if not reasonable. You only need a 10% deposit for this airy paradise.

Pie in the sky? Thought so. But there is some consolation.

If you can’t stretch to something in Manhattan then how about Lambeth or Lewisham?

Because loft living is catching on in London. And faster than it takes to put up something that looks like a giant walkie-talkie and calling it modern living.

The idea of bringing New York loft-style living to London first caught on in the 1990’s. There didn’t seem to be a market at the time, indeed, there was seemingly no interest at all. Large  and airy spaces at the top of dilapidated and largely forgotten old buildings were the rotting preserve of all manner of vermin; dank, dark dripping and foul.

But then a project was taken on at a disused print factory in Clerkenwell.

And everyone suddenly, and as if by magic, saw the light. Everyone, that is, apart from the Cities Estate Agents and Developers.

They just saw a nice new Jaguar in their driveway.

The not so new concept of open plan living with a nice view thrown in appealed to the creative set in the East End and, as a result, London started to love its abandoned loft spaces.

Much of the appeal was down to the new concept offered by property developers called 'Live/Work'.  This describes properties whose space is designed to incorporate both your professional and personal lives, the former made possible by the rise of digital technology meaning that the need to travel from home to work five days a week, at least in the traditional sense, is slowly becoming obsolete.

Just think, your new commute might involve you grabbling a nice fresh Mocha from your kitchen and crossing the hallway into your home office.

As far as London was concerned, it was the Borough of Hackney that helped set the standard. It’s reputation of being ran down and it’s need of massive investment saw the local authority encourage the regeneration of former factories and other abandoned industrial spaces for such use rather than devoting time and resources to developments that were solely residential in nature.

Where a the visionary London Borough of Hackney led the way, other London Boroughs soon followed with the concept swiftly being copied in other major Cities across the UK.

So, even if a place in New York is beyond you and London an unlikely dream at present, no reason to give up. How about a converted wharf in Norwich for example?

There’s no reason why you shouldn’t have that rooftop space with a view if you’re willing to stretch your boundaries. Which, let’s face it, is better than stretching your wallet.