How to Deal With Wasps in the Loft 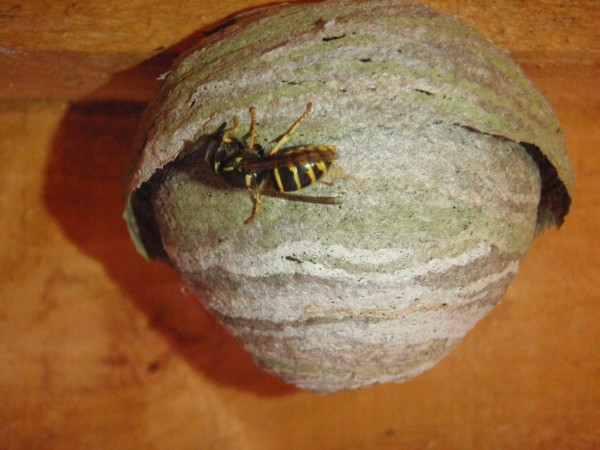 Nasty: Have you ever had to deal with one of these in the loft?

Your loft might be a dark and largely forgotten place at the moment. And let’s face it, if you only ever pop your head up there twice a year to either get or put back the Christmas decorations then its negligence of the very highest order.

But even if you don’t fancy it up there, there are those that do. And the darker, the warmer, the more neglected it is, the better they like it.

I’m talking about your having a close encounter of the unwanted kind.

And right above your heads. They’re live and they’re potentially dangerous. And you’ve given them a home.

And it’s fair to say you’re probably going to regret being so hospitable.

We’re all familiar with the little s.o.b’s. How they like to annoy you when you’re out in the garden. There’s always one or two flying around when you’re just trying to enjoy a Pimms and a chat with some friends. And no matter how much you manfully run away from the yellow and black demons, they’ll lurk and come back for some more buzzing mayhem.

What about if you had several thousand of them nesting in your loft?

With just the ceiling dividing you and a life of pain. Pain of the stinging kind.

Wasp infestation is a potentially troublesome problem from around May to November. A particularly  troublesome one if you are allergic to their stings as anaphylactic shock from one can, in some cases, result in death.

If you do get a wasps nest in your loft then yes, do, by all means, admire its intricate beauty. Their beautifully crafted homes are, after all, one of nature’s true wonders.

But you don’t want to be getting to close to it for too long.

Wasps will instinctively attack anyone that ventures too near to their nest. And, unlike a bee, they can sting you more than once. The few that you notice near the entrance to the nest will be the sentries. Once they’ve stung you a few times, they’ll go off in search of reinforcements. And believe me, you do not want to be in the immediate vicinity when they arrive.

Clearly, therefore, if you do notice that you have a wasps nest in your home then you need to do something about it and quickly.

We’re not going to tell you how to do that however. Because that’s a job for the experts. And believe me, the chap in that photo isn’t dressed like someone given the job of clearing up post-Chernobyl for nothing.

He knows what they’re capable of when suitably provoked.

So don’t provoke them. And it’s rather easy to provoke a wasp. You can do so by merely looking at them in a funny way.

So think about what sticking an enquiring finger into a nest might do.

So, let someone else do it. Local councils will have their own pest removal teams. There will also be private contractors only too willing to put their heads where it hurts.

Just make sure it’s their heads that go up in your loft to remove the yellow peril, not yours.